Masseria Fano today has the advantage of being a magical and uncontaminated place but it was also in the past if we consider that its name “Fano” derives from the Latin Fanum or “place of the Gods”.

It is said that there was once a great civilization. It was destroyed, wiped off the face of the earth by an unprecedented cataclysm. It was the Minoan culture, one of the most brilliant in history.
It all began, or rather ended, with the explosion of the Thera volcano, today’s Santorini. It was that, the most powerful manifestation of Nature, so powerful as to cause a devastating tsunami that brought destruction and death a thousand kilometers away.
It is also said that the few exiles, crossing the Mediterranean, landed on the coasts of Salento. In search of a new land, they stopped in a fertile place, rich in water and enveloped, due to the numinous landscape, in mystery. To this place they gave the name of the most important divinity of their divine pantheon: “Phanes” (Fano); it was 1,550 BC Two thousand and five hundred years later, in the year 1000 AD, the monks of San Basilio settled there, digging rock churches and caves, to live in solitude, praying and cultivating the vine and the olive tree. 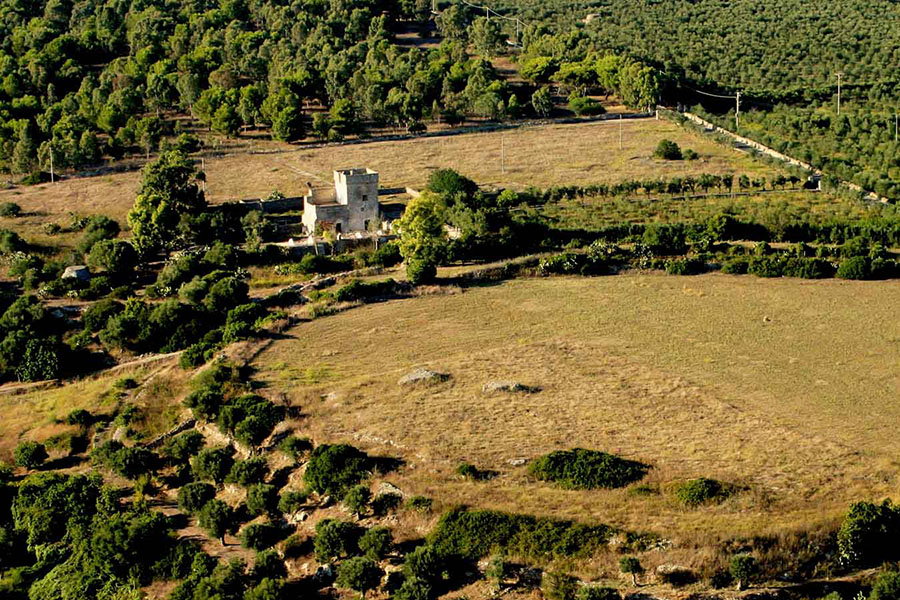 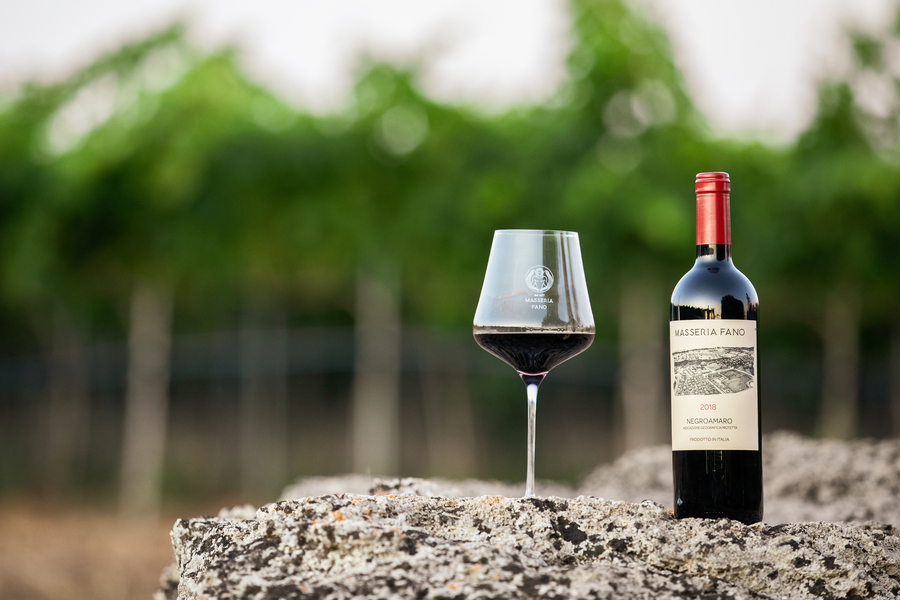 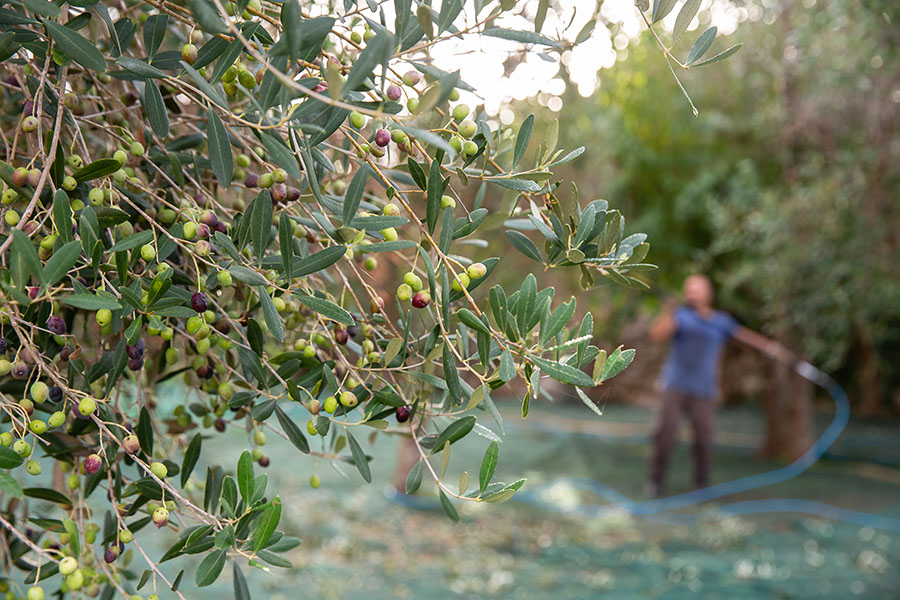 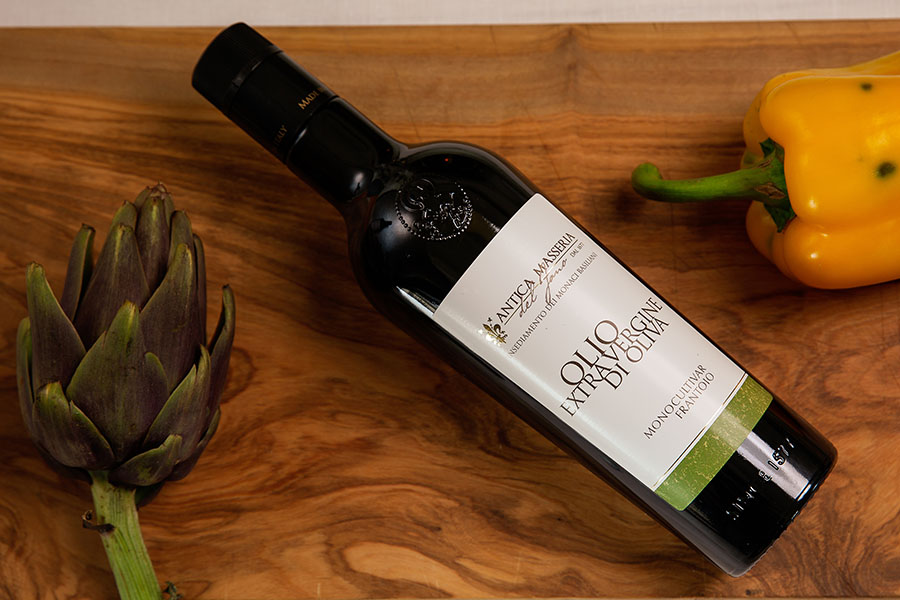 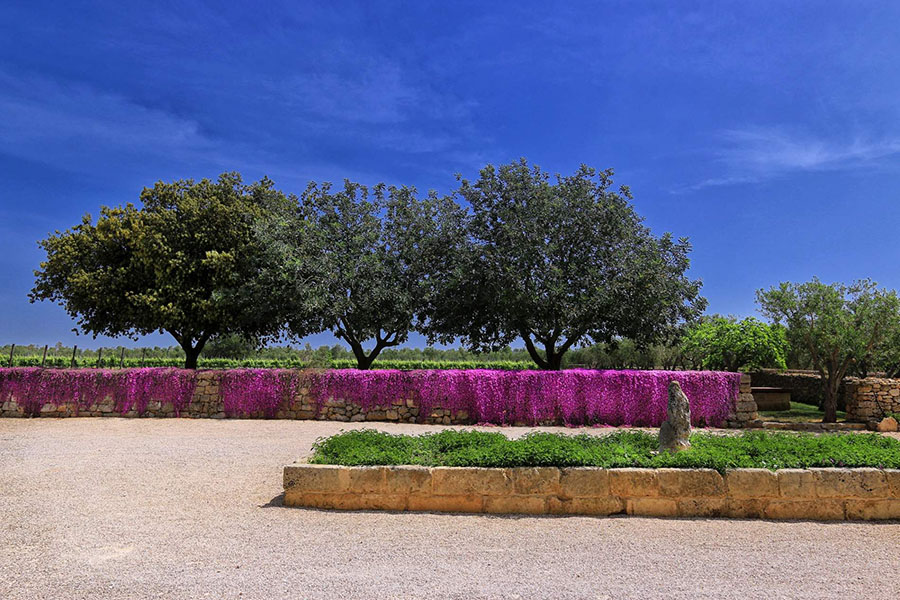 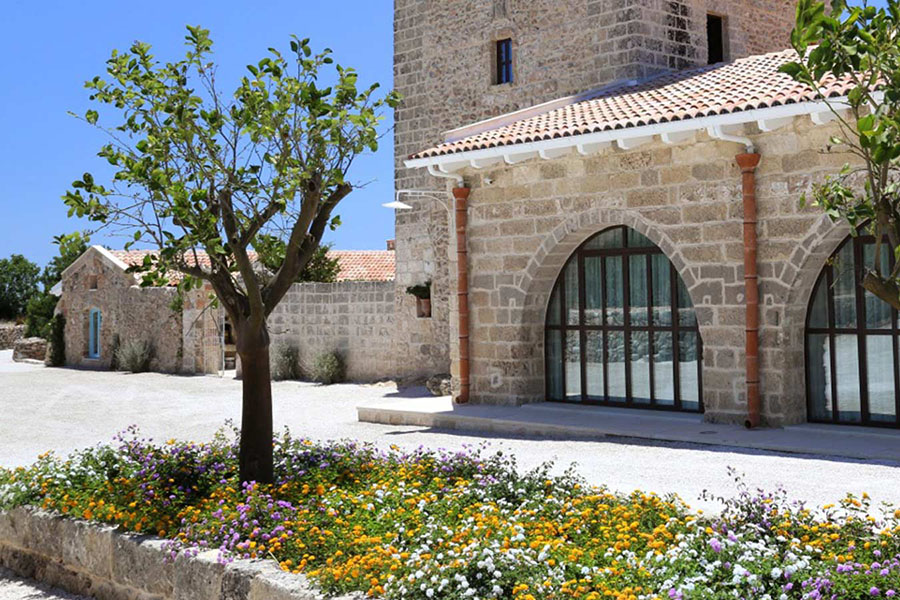 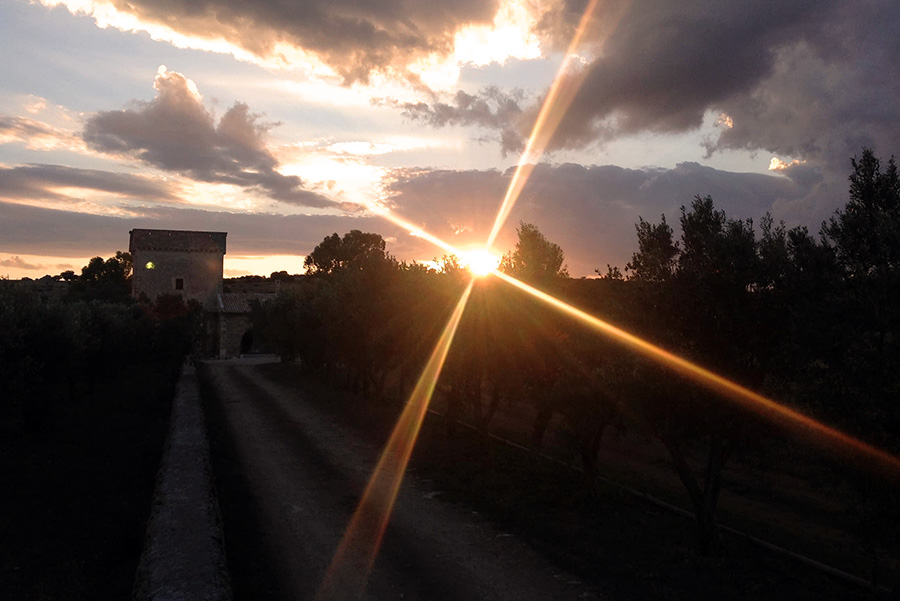 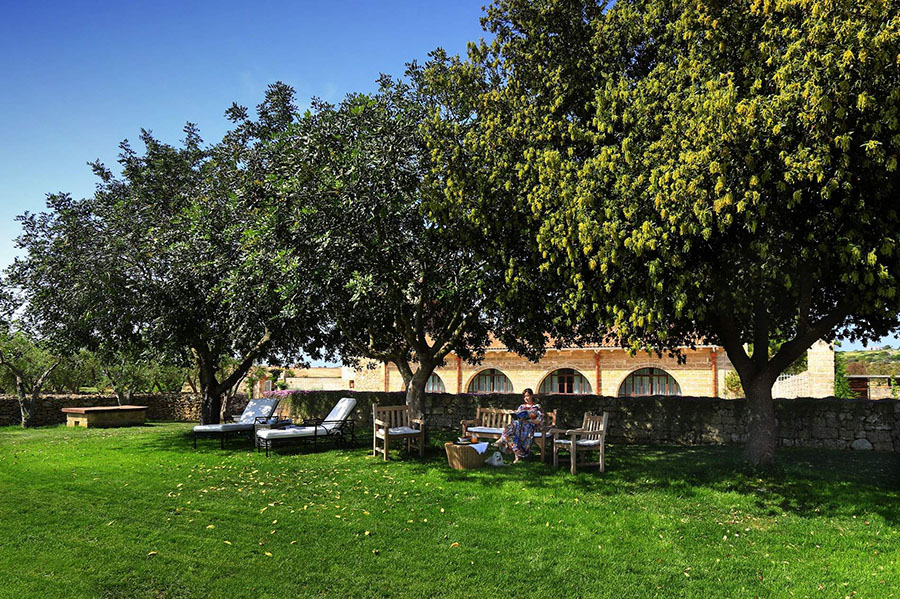 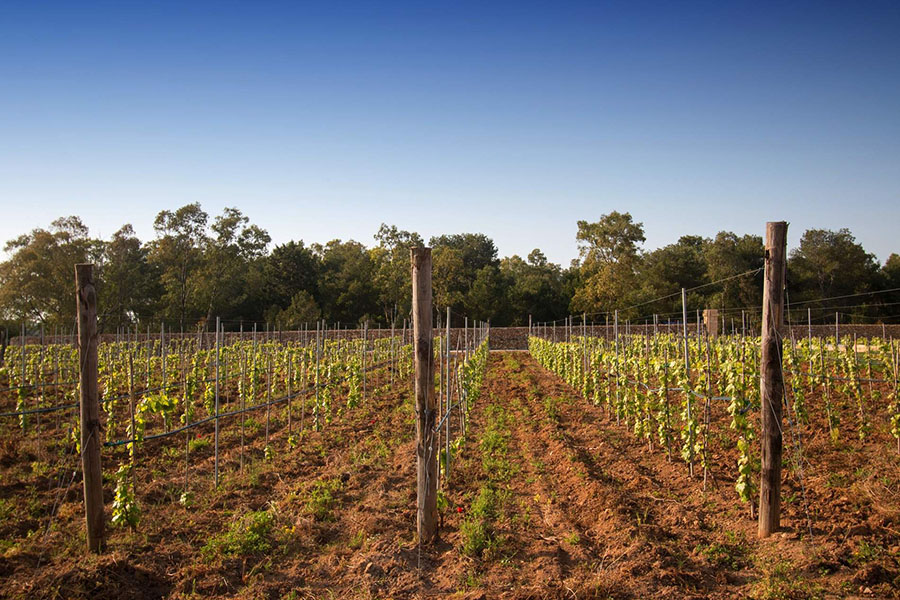 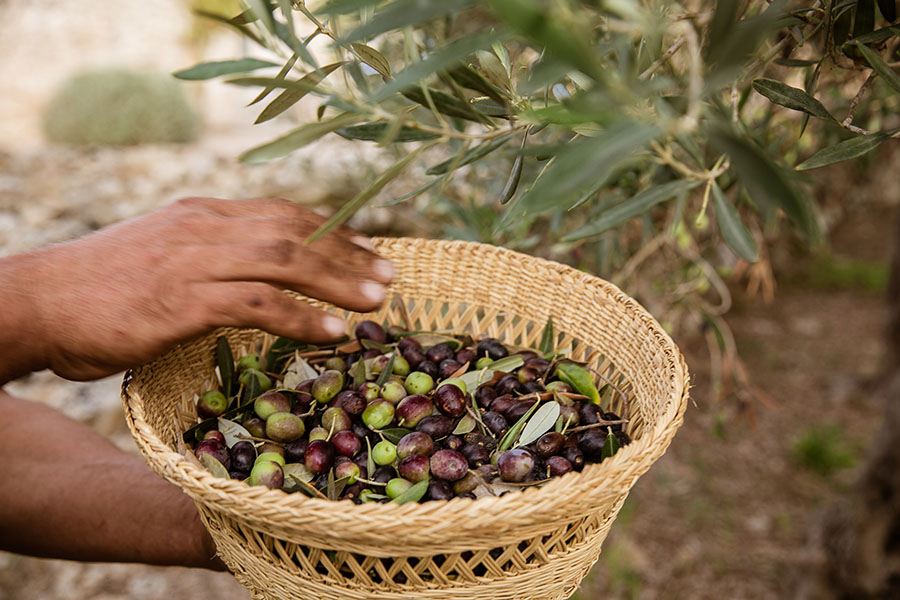 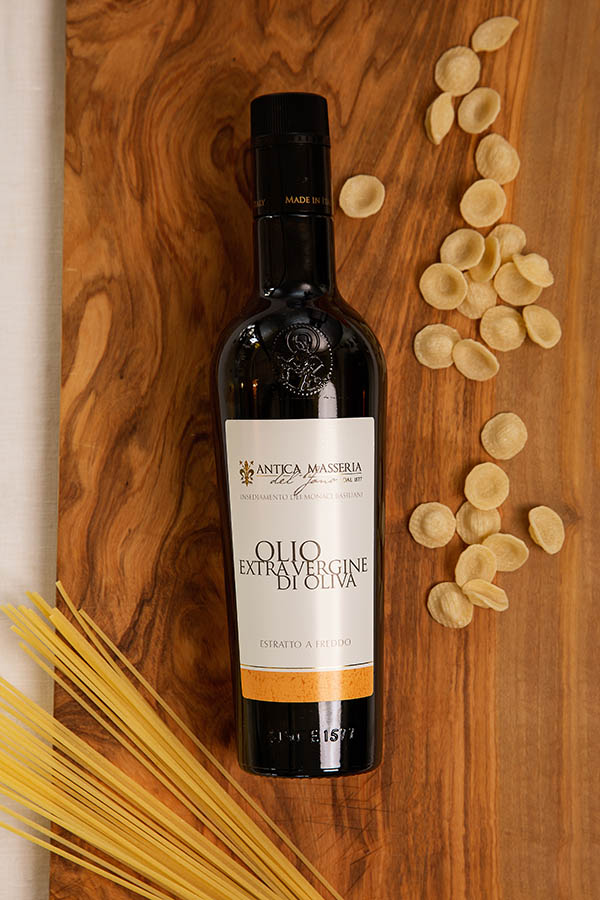 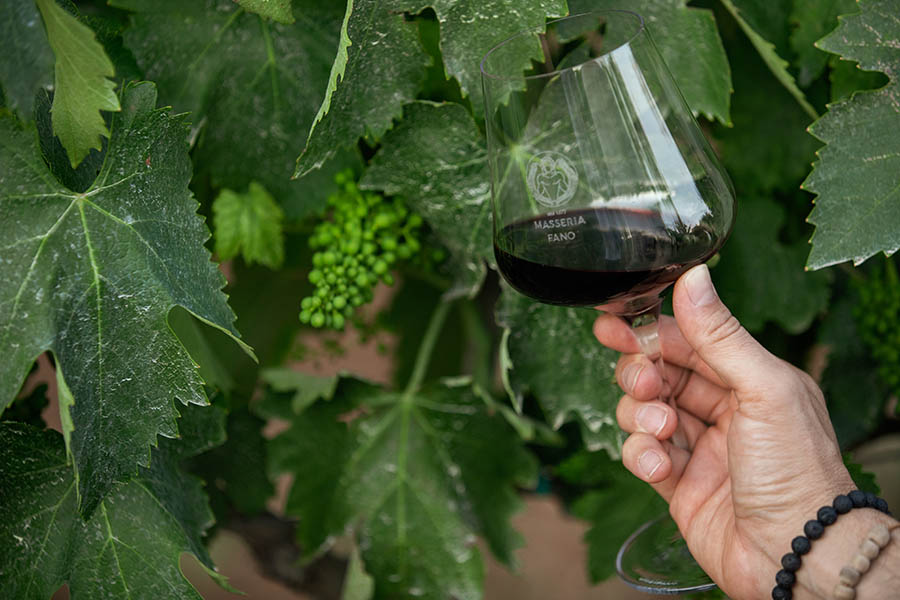 In 1577 Andrea Gonzaga, Marquis of Alessano and Specchia, erected a defense tower to protect the Masseria from pirates, also increasing the production of oil, wine and figs.
The last owner of the site, Baroness Vittoria Colonna, left the Masseria in 1954, abandoning it to herself. But the legend of the ancient and excellent vineyard is still told in Salento, and is cloaked in wonders and profound secrets, so much so that even the Roman emperors, it is said, came here to get supplies. The vineyard is still there and it is the same one that the noble lady jealously guarded, the same one that Roberto Ziletti carefully recalled to new life.
Today those shoots produce a unique, precious wine. It is the memory of those rooted cuttings that, under ancient starry nights, crossing the Mare Nostrum, those ancient Minoan exiles brought to Fano, and they certainly tasted inebriated with those fruits.

A few tens of meters south of the tower is the “Chiusa del Fano“, an archaeological area where for ten years it has been the object of an exploratory campaign by the University of Sydney in collaboration with the University. of Lecce. The same places then served as a refuge in 727 AD. thousands of monks who escaped the massacres ordered by the Byzantine emperor Leo III arrived in these lands.

Their place of prayer depicting a rare iconoclastic testimony is still intact and preserved. The fortification of the tower is the work of Andrea Gonzaga (1539-1586) who was the first Marquis of Alessano (Municipality of which Salve was part) and the nearby community of Specchia. Her mother, Isabella di Capua, had brought many fiefdoms of Naples as a dowry to the Gonzagas, including Alessano.

The Masseria and its surrounding reality shine with this story.
A story that speaks of refuge, hope, religion and the profane. A story that still remains alive today and that is given to us as it is, thanks to a territory made up of sea, land, trees that tell this story every day and we, together with your journey, can take care of and preserve.

The Extra Virgin Olive Oil of the Basilian Monks, is produced mainly from olives of the Ogliarola Salentina variety, it is the most typical and characteristic cultivar of our area. The olive groves are immersed and surrounded by pines, eucalyptus and Mediterranean scrub. We cultivate about 40 hectares of olive trees, for a total of 1,500 plants. The olive groves are between 15 and 75 meters above sea level, on steep slopes overlooking the beaches of Pescoluse.

At the foot of the fortified tower of the Masseria erected by the Gonzagas of Mantua and Conti di Alessano in 1577, a Superior Quality Extra Virgin Olive Oil is produced today.

The uncontaminated nature of the area, the clean air full of iodine pushed by the sea breeze, the scrupulous application of the organic regulations, make the Basilian Monks Oil a product that is difficult to find today in the international oil scene.

The yield is between 12 and 15% and since these are secular plants (the oldest are 450 years old), we are talking about 10/15 liters. to plan. The olives are brought to the mill on the day of harvesting to maintain the maximum freshness of the fruits and the oil obtained from them. Crushing and extraction are very accurate, at temperatures below 27 ° C, with a continuous crusher. The level of acidity between 0.20 and 0.40%, that of peroxides between 4 and 6 both very low, indicating exceptional freshness and shelf life over time.

The history of wine is intimately intertwined with that of man. It is therefore difficult to trace its path starting from the dawn of time, then climbing up to the modern era.
Some archaeological findings have shown that this climbing plant, scientifically called “Vitis Vinifera”, grew spontaneously in the forests between the Caspian Sea and the peaks of the Himalayas as early as 300,000 years ago.
The history of wine, however, began to be written in the East, precisely in the Bronze Age, between 3400 and 2100 BC. Already, however, it was no longer a spontaneous plant but a domestic one that made its appearance precisely in areas such as Egypt, Jordan and Palestine. It is in this historical passage and geographical area that humanity begins to cultivate it, discovering its values ​​and, in particular, enjoying the taste of that intoxicating juice. So intoxicating that those who drink it are immediately charged with a mystical aura, with religious values ​​so that the vine immediately enters the symbolism of the imagination, in the thick and varied Olympus of the Gods.

It is difficult not to share the passion that is the basis of all those who dedicate themselves to the cultivation of wine grapes, first and foremost due to the millenary history that accompanies this human practice. Then for the aggregative-social capacity that this nectar can bring into play when it is wisely sipped.
And it is at this point that I allow myself a reflection: “If wine becomes my greatest passion, then I hope to find, through this work too, the right way to produce excellent quality and wholesomeness. I also plan to be able to sell it, my product grown with care and passion, in every corner of the world. After all, selling wine is offering pleasure, it is giving something that looks a lot like a “dream”.

Masseria Fano has received some of the most prestigious awards and prizes on the national and international scene, as regards the excellence of the production of extra virgin olive oil.
OUR PRODUCTS
ROOMS AND SUITES